In his first address to the newly sworn in 115th Congress, House Speaker Paul Ryan (R-Wis.) posed the following question: “Find one person [in this chamber] who doesn’t want to help the unemployed, or care for the sick, or educate the young…who here among us does not want to open wide the door to opportunity?”

Now as we're 100 days and counting into the 115th Congress, their actions give us the answer.

Ryan and Senate Majority Leader Mitch McConnell are certainly trying to “open wide the doors of opportunity,” but only if you are a CEO who profits by cutting corners on workers' health and safety, or siphoning off millions from their retirement accounts.

For people who are unemployed, both Ryan and McConnell supported a budget plan that would drastically cut back on job training, Meals on Wheels and education funding for children with disabilities.

For the sick, the Republican leaders tried to gut Obamacare and replace it with a plan that would deprive 24 million Americans of health insurance, tax working peoples’ benefits, slash Medicaid benefits for the elderly and people with disabilities, and jeopardize the future of Medicare for seniors.

And for education, they confirmed an education secretary who spent her billions undermining public education and attacking teachers.

During the first 100 days, the House voted 15 times and the Senate 13 times to wipe out Obama-era regulations that were protecting Americans from workplace hazards. They even removed one rule that requires corporations to simply keep accurate records of injuries, so they can be avoided in the future.

They voted to let CEOs cover up their past employment violations when they apply for new taxpayer-funded government contracts. The House passed several bills that will give corporations more power to stop federal regulators from passing commonsense safeguards in the future.

Just this week, they put a champion for corporate America on the U.S. Supreme Court and are working on a tax plan that would further reduce taxes on corporations and the rich while starving programs that support needy families.

One thing Congress didn’t seem to have time for was passing critical legislation that would keep the promise made to more than 22,000 retired coal miners who will lose their federally guaranteed health benefits on April 30.

Find one person in Congress who isn’t for helping the unemployed, the sick and the young? During the first 100 days, there were enough of them to form a voting majority in the U.S. House and Senate. 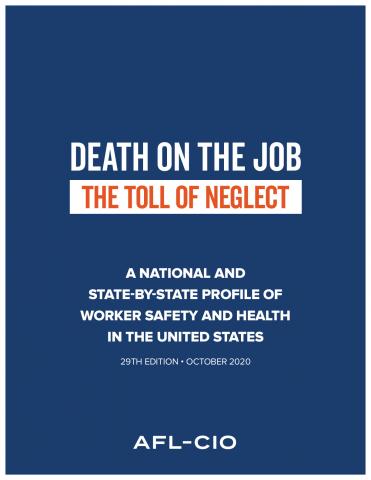 October 6, 2020
This 2020 edition of the “Death on the Job: The Toll of Neglect” report features national and state information on workplace fatalities, injuries, illnesses, the number and frequency of workplace inspections, penalties, funding, staffing and public employee coverage under the Occupational Safety and Health Act. It also includes information on the state of mine safety and health, and the COVID-19 pandemic.