Mass incarceration is not only a civil rights issue, it’s an economics issue. One-third of African American men will serve time in federal prison during their lifetimes. That’s an incarceration rate five times greater than that for white men, even though studies have shown that white men and black men commit crimes at roughly the same rates. The mass criminalization of millions of men and women, mostly people of color who are imprisoned for small infractions, creates a group of second-class citizens who are unable to rebuild a life for themselves even after serving their time. Once those men and women get out of prison, they have a harder time finding employment and housing due to their arrest records.

The labor movement is a movement of second chances and firmly believes our criminal justice system needs to offer people another chance to contribute to our society. The AFL-CIO staunchly opposes harmful policies like mandatory sentences for nonviolent crimes, and we support programs that help people reintegrate into their communities, such as job training, education, probation and parole. If we are going to raise wages for all workers, we have to ensure that everyone has a fair shot at earning a wage. Together we are working toward achieving a reformed criminal justice system that offers formerly imprisoned people an economic path forward and restores voting rights. 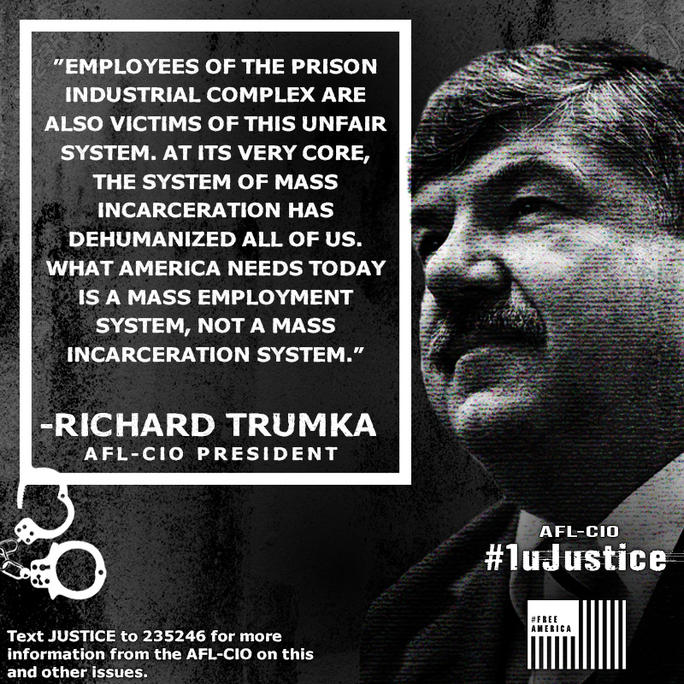 The criminal justice system is rotten.

Did You Know
Black men are nearly six times as likely to be incarcerated as white men.
500
Percent population change in U.S. prisons and jails since 1977.

A letter to senators in support of the First Step Act (S. 756), a modest but necessary measure to reform our criminal justice system.

Joe Arpaio's infamous tent city, a sign of all that was wrong with his tenure as sheriff, is finally closing.

‘We Will Not Sit on the Sidelines’: John Legend’s Proposal for Ending Mass Incarceration

I was fortunate to grow up in a union household. I know how important they are for families and communities.

'Pregnancy Isn't Part of the Uniform': Winners and Losers of the Week

Each week, we take a look at the biggest friends and foes of labor. We celebrate the workers winning big and small battles, and we shame the companies or people...