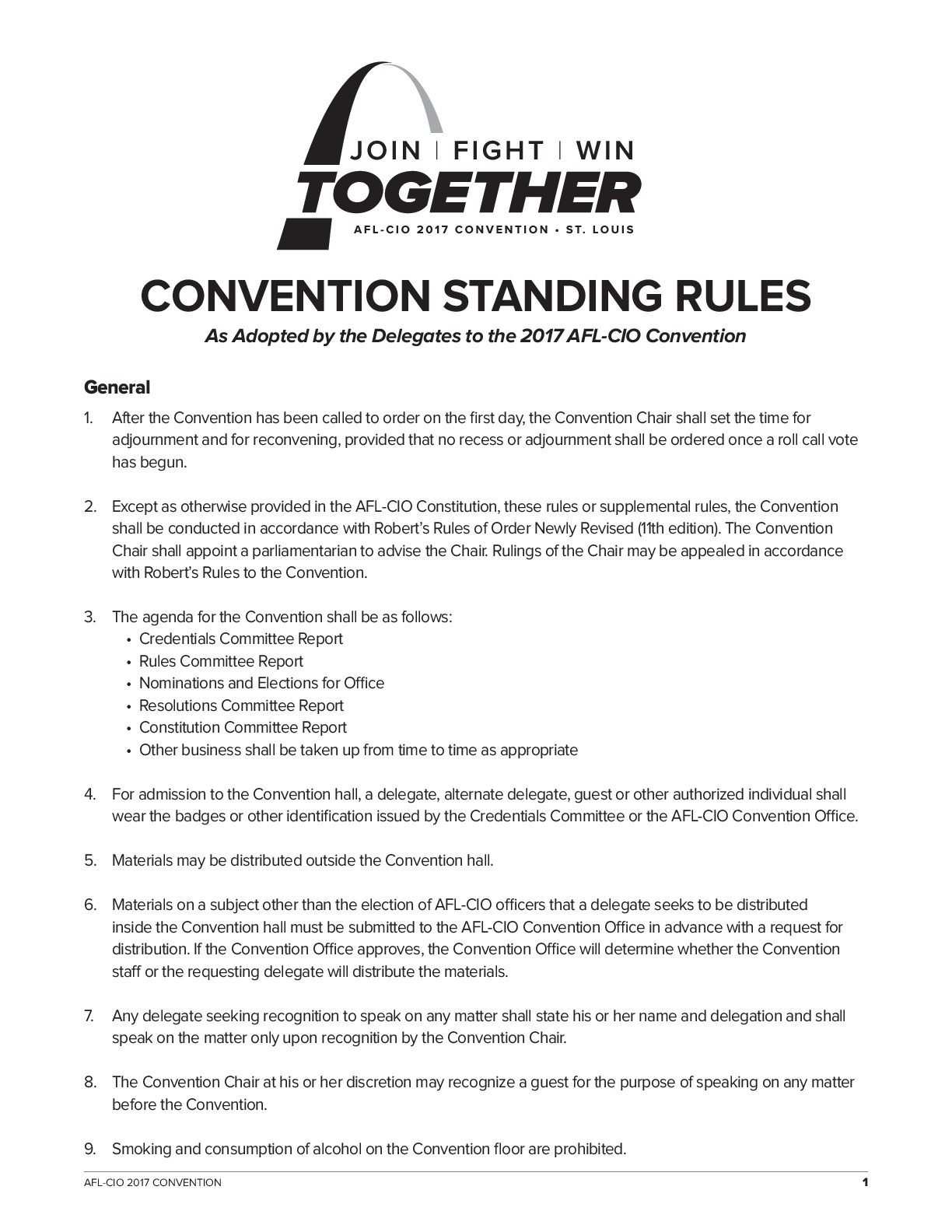 Convention Standing Rules, as adopted by the delegates to the 2017 AFL-CIO Convention.

3. The agenda for the Convention shall be as follows:

4. For admission to the Convention hall, a delegate, alternate delegate, guest or other authorized individual shall wear the badges or other identification issued by the Credentials Committee or the AFL-CIO Convention Office.

5. Materials may be distributed outside the Convention hall.

7. Any delegate seeking recognition to speak on any matter shall state his or her name and delegation and shall speak on the matter only upon recognition by the Convention Chair.

8. The Convention Chair at his or her discretion may recognize a guest for the purpose of speaking on any matter before the Convention.

10. Debate shall proceed as follows:

(b) No delegate shall speak for more than three minutes on any pending question. A delegate may not speak a second time upon the same question until all delegates wishing to speak on that question have had an opportunity to do so.

(c) If the Convention Chair deems it necessary, separate microphones shall be set up for those supporting and opposing the matter before the Convention, and the Chair shall recognize alternating speakers on the two sides unless there are not speakers seeking recognition on both sides.

(d) If a delegate is called to order while speaking, the delegate shall be seated until the question of order is decided.

11. When a question is to be decided, whether by a majority or two-thirds of delegates present and voting, the Convention Chair shall first conduct a voice vote and, at the Chair’s discretion in doing so, the Chair may remind delegates and others on the Convention floor that only delegates are eligible to participate in the vote. If in the view of the Chair (whether or not any delegate calls for a division) the voice vote is inconclusive, the Chair shall retake the vote by an uncounted rising vote. If in the view of the Chair this vote also is inconclusive, or if the Convention so directs upon proper motion and vote, the floor shall be cleared of all but regular delegates and the Chair shall retake the vote by a counted rising vote. At any time after the conduct of the voice vote and before the Convention proceeds to the next order of business, a roll call may be conducted upon the demand of 30% of the delegates present.

(a) The Convention Chair (or his or her designee) shall conduct the roll call vote. In calling the roll, the Chair shall first call upon the delegation chair of each national and international union, in order of the AFL-CIO’s standard alphabetical listing of affiliated unions. Upon being called, the delegation chair (or his or her designee) shall cast the union’s vote entitlement either as a bloc or as the delegation allocates it. National and international union delegates who do not answer to their names shall not be permitted to vote at a later point in the roll call.

(b) If, after calling the roll of the national and international unions, a majority of the total vote entitlement of all registered delegates is obtained in favor of or against the question (or, where a two-thirds vote is required, two-thirds of that vote entitlement is cast in favor or more than one-third is cast opposed), the Convention Chair shall discontinue the calling of the roll and shall announce the result. Any delegate entitled to vote who has not been called shall be given the opportunity to record his or her vote with a recording secretary designated by the Chair, and the final official tally will reflect all such recorded votes.

13. The Convention Chair may at any time temporarily suspend debate (but not a vote) on a pending matter to allow an invited guest to speak. Upon conclusion of the speech, debate shall resume on the business that was pending when the debate was interrupted.

14. In addressing resolutions, constitutional amendments, appeals, petitions, reports and memorials (together, for purposes of these Rules, “resolutions”) that have been referred to the committee by the AFL-CIO President but have not been approved by the Executive Council, a committee:

(a) May report out resolutions for separate recommended action on each by the Convention, including but not limited to adoption, rejection, referral or no action, and in doing so may amend a resolution only upon the request or approval of its sponsor;

(b) May report out a group of resolutions for recommended action as a bloc if at least 75% of the committee members agree (the Convention Chair will briefly state the subject of each resolution and take the vote on the grouped resolutions as a bloc);

(d) May refer a resolution to the Executive Council; and

(e) May decline to report out a resolution for action by the Convention if at least 75% of the committee members agree.

15. In addressing resolutions that the Executive Council has approved and referred to the committee, the committee:

(a) Must report out the resolutions to the Convention;

(b) Shall treat such a resolution as the lead resolution and subsume others on the same subject in accordance with Rule 14(c) above; and

16. On committee reports concerning action on a resolution, the question shall be stated to the Convention as being on the resolution itself.

Nomination and Election of Candidates for Office

21. The nomination of candidates for office shall take place on the Convention’s first day.

23. To be eligible to be nominated, an individual must, at the time of nomination, be a member of an organization affiliated with the AFL-CIO.

24. Any delegate or Executive Council member may nominate or second the nomination of a candidate for office.

31. Nominees may run as a slate for the Executive Offices or for the offices of Vice President, and shall notify the Election Officer in writing on the day of their nomination of their intention of doing so. Any slate for the offices of Vice President shall devote no less than 15 positions to carrying out the commitment to an Executive Council that is broadly representative of the diversity of the membership of the labor movement, as set forth in Article VI, Section 1(f) of the Constitution.

32. (a) The Election Officer shall prepare one ballot listing the nominees for the Executive Offices. The order of listing of nominees for each office shall be determined by a drawing by lot conducted by the Election Officer, which any nominee or his or her designee may attend. If nominees are part of a slate, the ballot shall designate their status as a slate.

(b) The Election Officer shall prepare a separate ballot listing the nominees for Vice President and their union affiliations. Nominees for Vice President shall be listed in the order in which they were nominated. Nominees who are part of a slate shall be listed together in alphabetical order within the slate, and the ballot shall designate their status as a slate and provide a means for delegates to cast a single vote for the slate.

33. The election shall take place on the second day of the Convention. The polls shall open at 7 a.m. and close at 8 a.m. Any delegate in line at the registration area at 8 a.m. shall be permitted to vote.

36. Each delegate shall first register to vote at the appropriate registration desk by providing proper identification and by signing his or her name on the registration list prepared by the Election Officer. At the time of registration, but not otherwise, an observer may challenge the right of an individual seeking to vote. The challenged individual shall be given a ballot marked “challenged,” which shall be segregated from all nonchallenged ballots.

37. Upon registering, the chair of the delegation of each national and international union voting by bloc shall be given and instructed to sign a certification, prepared by the Election Officer, that the chair has been authorized to cast the union’s vote by bloc, and shall be given and instructed to sign an Executive Officers ballot and/or a Vice Presidents ballot stating the chair’s name, the union’s name and the union’s vote entitlement as determined by the approved report of the Credentials Committee. For the purposes of these rules, the delegation chair shall be the president of the union unless the president designates an alternative chair from among the union’s delegates and so notifies the Election Officer.

38. No delegate who is not the chair of his or her delegation shall be given a ballot unless and until the delegation chair notifies the Election Officer that the delegation will not be voting by bloc. Otherwise, upon registering, delegates from national and international unions voting individually shall be given and instructed to sign an Executive Officers ballot and/or a Vice Presidents ballot stating the delegate’s name, the union’s name and the delegate’s proportionate share of the union’s vote entitlement, determined by dividing the union’s vote entitlement, as set forth in the approved report of the Credentials Committee, by the total number of delegates from the union included on the posted voting list.

39. Upon registering, delegates from directly affiliated local unions shall be given and instructed to sign an Executive Officers ballot and/or a Vice Presidents ballot stating the delegate’s name, the local union’s name and the local union’s vote entitlement as determined by the approved report of the Credentials Committee.

40. Upon registering, delegates from trade and industrial departments and state, area and local central bodies shall be given and instructed to sign an Executive Officers ballot and/or a Vice Presidents ballot stating the delegate’s name, the organization’s name and the vote entitlement of one vote.

41. Delegates shall cast their ballots in the voting area in such manner as the Election Officer designates.

42. Each Ballot for the office of Vice President must be cast for a number of nominees equal to the number of positions elected, and must cast the full voting strength of the delegate or affiliate voting.

43. Immediately upon the conclusion of the balloting, the Election Officer shall count the ballots in the voting area, which shall be reconfigured as necessary for the counting of the ballots. The Election Officer shall first tally and record the votes for the Executive Officers, and then shall tally and record the votes for the Vice Presidents, using tally sheets prepared for that purpose. In tallying the ballots of national and international union delegates voting individually rather than by bloc, the union’s full vote entitlement shall be allocated pro rata in the event that one or more of the union’s credentialed and registered delegates does not vote. Any such ballots shall be initialed by the Election Officer after the proper allocated vote entitlement is marked on the ballot. The Election Officer shall, in the course of the tally, rule on all challenges and include or exclude the challenged votes, as appropriate.

44. In the event that a runoff election is required under Article VI, Section 1(e) of the Constitution, the Election Officer shall conduct that election as promptly as possible, following the procedures set forth above and using the same eligibility lists as were used for the first election.

47. The Election Officer shall have the authority to vary the time limits stated in these rules by a written posted ruling.