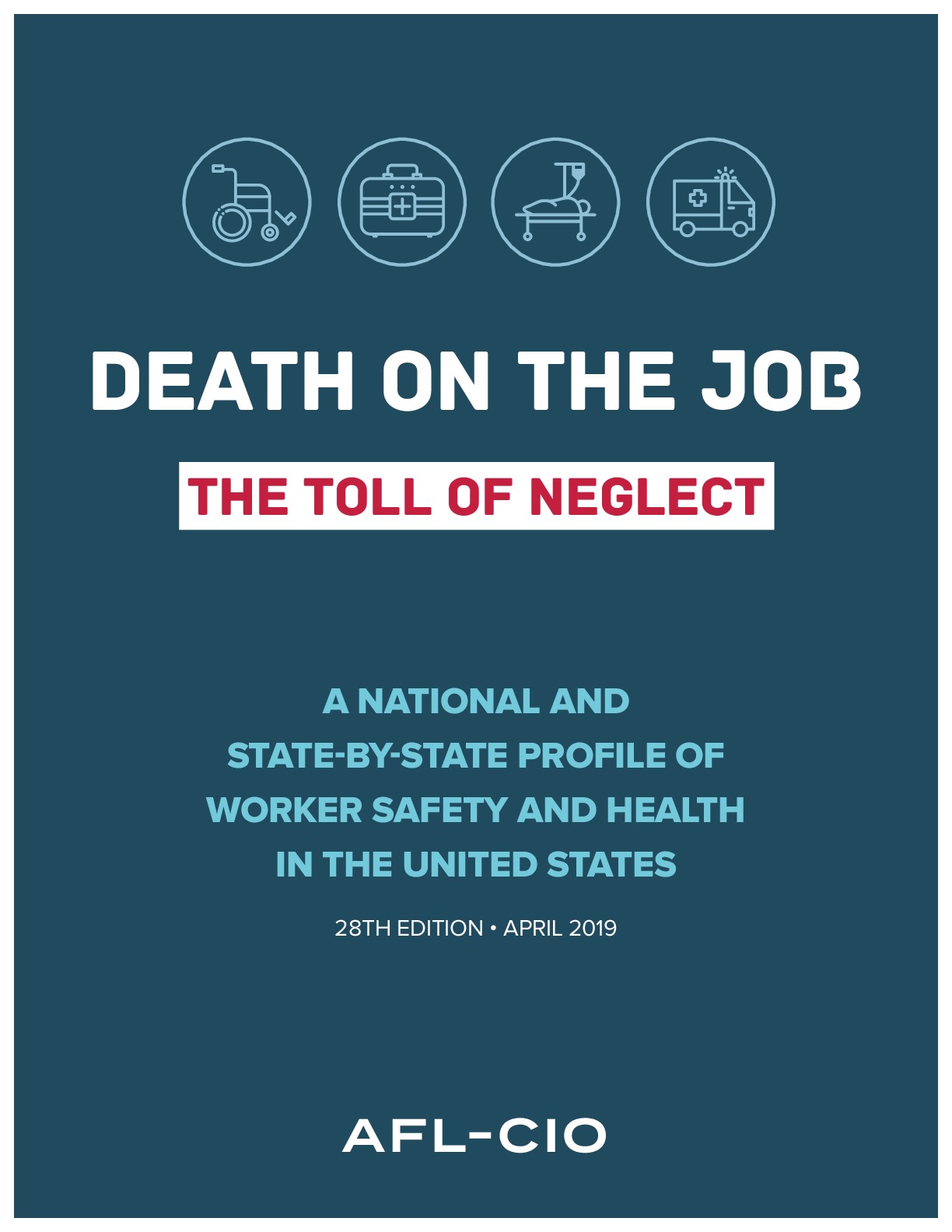 This 2019 edition of “Death on the Job: The Toll of Neglect” marks the 28th year the AFL-CIO has produced a report on the state of safety and health protections for America’s workers. This report features national and state information on workplace fatalities, injuries, illnesses, the number and frequency of workplace inspections, penalties, funding, staffing and public employee coverage under the Occupational Safety and Health Act. It also includes information on the state of mine safety and health.

Nearly 50 years ago, in 1970, Congress enacted the OSH Act, promising workers in this country the right to a safe job. More than 594,000 workers now can say their lives have been saved since the passage of the OSH Act. Since that time, workplace safety and health conditions have improved. But too many workers remain at serious risk of injury, illness or death as chemical plant explosions, major fires, construction collapses and other preventable workplace tragedies continue to occur. Workplace violence is a growing threat. Many other workplace hazards kill and disable thousands of workers each year.

In 2017, 5,147 workers lost their lives on the job as a result of traumatic injuries, according to fatality data from the Bureau of Labor Statistics. Each day in this country, an average of 14 workers die because of job injuries—women and men who go to work, never to return home to their families and loved ones. This does not include those workers who die from occupational diseases, estimated to be 95,000 each year. Chronic occupational diseases receive less attention, because most are not detected until years after workers are exposed to toxic chemicals, and occupational illnesses often are misdiagnosed and poorly tracked. All total, on average 275 workers die each day due to job injuries and illnesses.

The cost of these injuries and illnesses is enormous—estimated at $250 billion to $330 billion a year.

With the election of President Trump, the political landscape and direction of the job safety agencies shifted dramatically. President Trump ran on a pro-business, deregulatory agenda, promising to cut regulations by 70%. Since taking office in January 2017, the Trump administration has moved aggressively on its deregulatory agenda. Through executive orders, legislative action, and delays and rollbacks in regulations, the Trump administration has sought to repeal or weaken many Obama administration rules. For the first two years of the administration, with Republicans in control of Congress, there was little oversight and only a limited ability to block these regulatory attacks and rollbacks. As a result, important safety and health protections have been repealed or weakened. There has been little action to address hazards like workplace violence that need attention and new regulation.

Job safety and health enforcement at both the Occupational Safety and Health Administration and the Mine Safety and Health Administration largely has been maintained, with some cutbacks in OSHA inspections involving significant cases and complex hazards. At both agencies, the number of inspectors has declined significantly; at OSHA, the number of job safety inspectors is at its lowest level since the 1970s.

President Trump has proposed cuts in key worker safety and health programs in the budgets for FY 2018, FY 2019 and FY2020, seeking to cut finding for coal mine enforcement; eliminate OSHA’s worker safety and health training program and the Chemical Safety Board; and slash the NIOSH job safety research budget by more than 40%. To date, Congress has rejected these proposed cuts.

President Trump nominated corporate officials to head the job safety agencies. David Zatezalo, a coal industry executive from Rhino Industry Partners, was nominated to head the Mine Safety and Health Administration and was confirmed by the Senate on Nov. 15, 2017. Scott Mugno, vice president of safety, sustainability and vehicle maintenance at FedEx Ground, first was nominated to head the Occupational Safety and Health Administration on Nov. 1, 2017, and most recently renominated on Jan. 16, 2019. Due to opposition from Democrats and the slow pace of Senate confirmations, Mugno has yet to be confirmed. Both of these individuals have long experience and involvement with the job safety agencies, and have records of opposing enforcement and regulatory actions.

With the election of a Democratic majority in Congress, the political environment for safety and health has greatly improved. Four months into the 116th Congress, Democrats are moving aggressively on a pro-worker agenda, introducing progressive legislation and conducting vigorous oversight of the Trump administration’s policies and programs. In a divided Congress, it is unlikely that many of these legislative proposals will become law, but in the next two years the foundation can be set for making progress in coming years.

Nearly five decades after the passage of the OSH Act, the toll of workplace injury, disease and death remains too high. There is much more work to be done.

Key Findings: Death on the Job: The Toll of Neglect, 2019 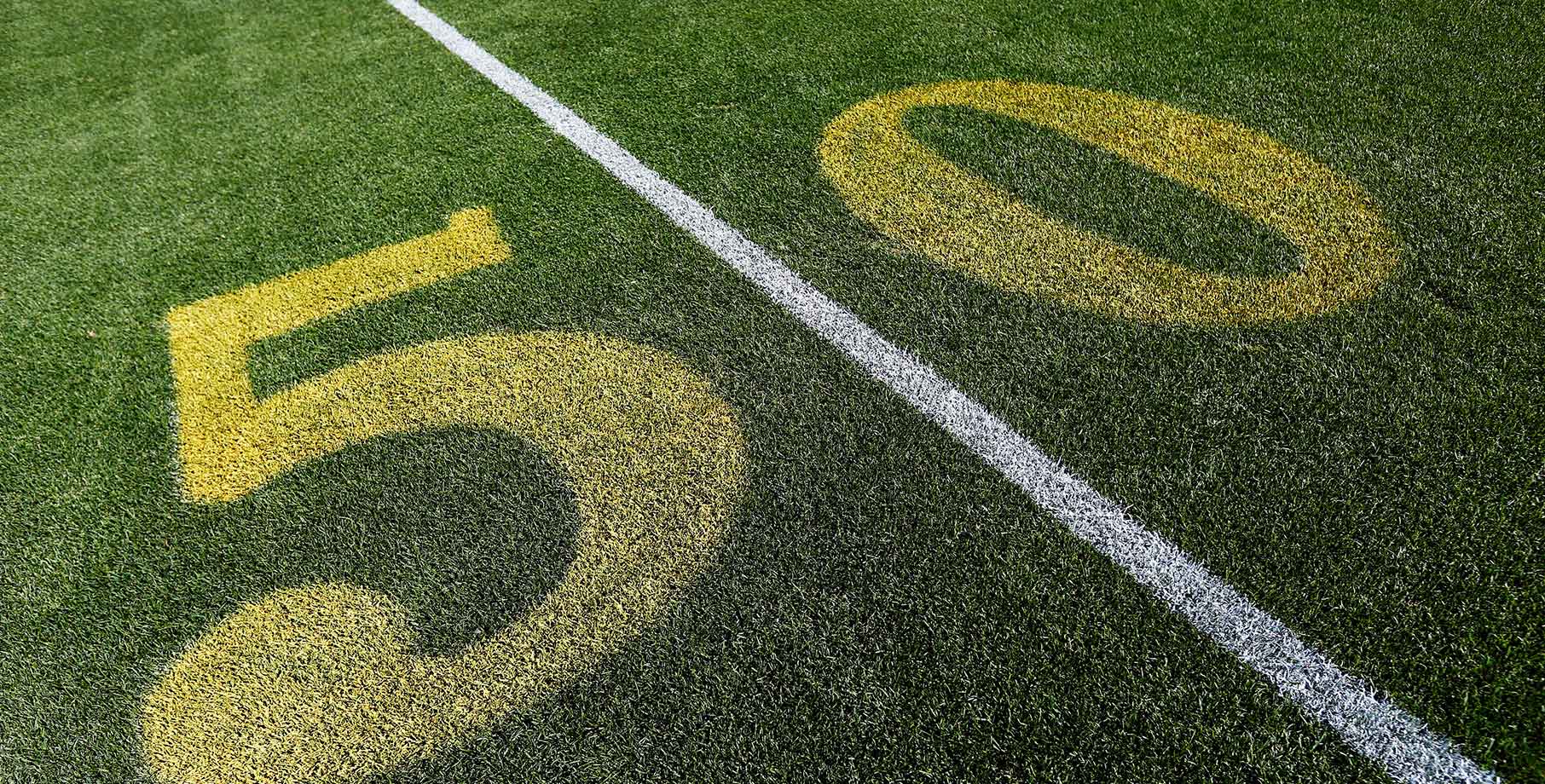