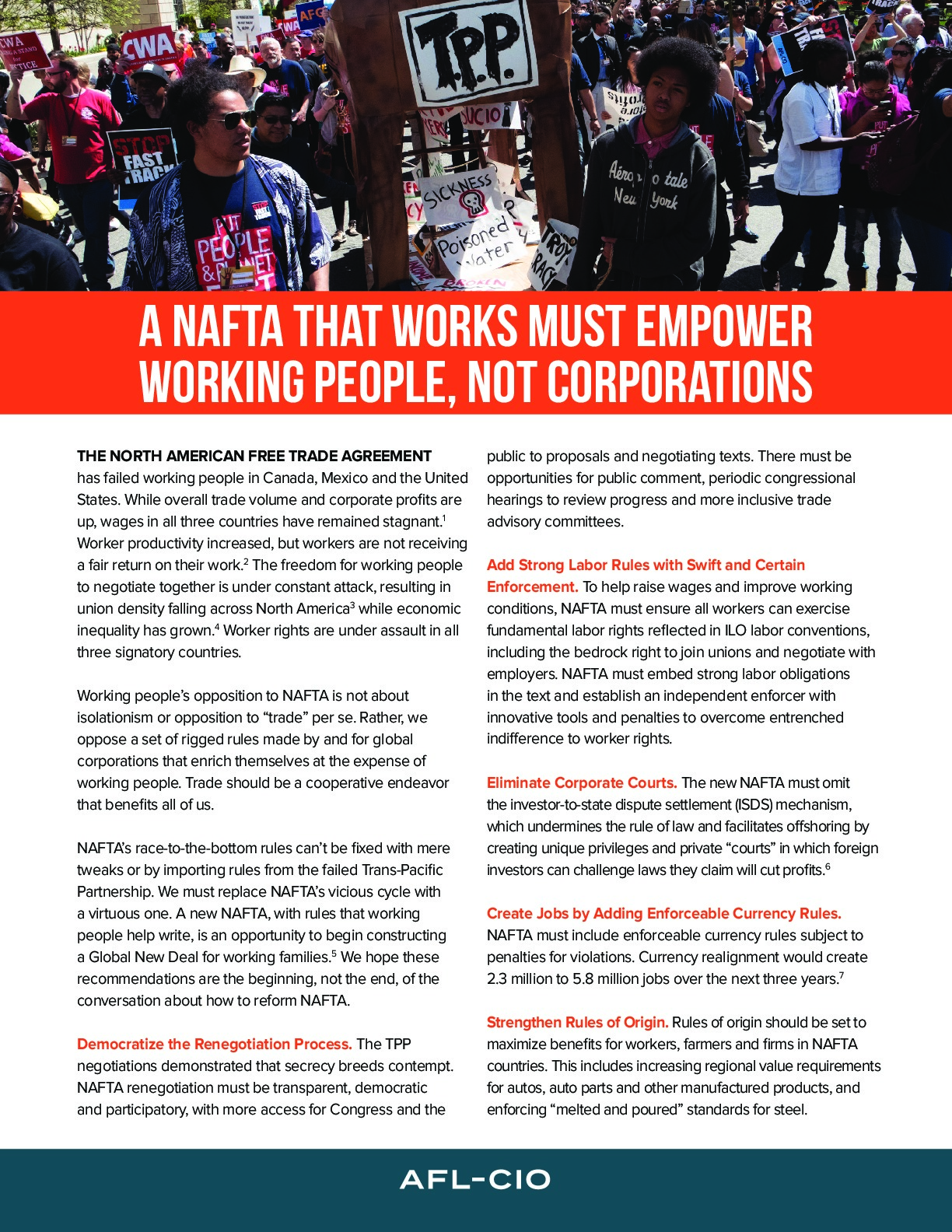 The North American Free Trade Agreement has failed working people in Canada, Mexico and the United States. While overall trade volume and corporate profits are up, wages in all three countries have remained stagnant.1 Worker productivity increased, but workers are not receiving a fair return on their work.2 The freedom for working people to negotiate together is under constant attack, resulting in union density falling across North America3 while economic inequality has grown.4 Worker rights are under assault in all three signatory countries.

Working people’s opposition to NAFTA is not about isolationism or opposition to “trade” per se. Rather, we oppose a set of rigged rules made by and for global corporations that enrich themselves at the expense of working people. Trade should be a cooperative endeavor that benefits all of us.

NAFTA’s race-to-the-bottom rules can’t be fixed with mere tweaks or by importing rules from the failed Trans Pacific Partnership. We must replace NAFTA’s vicious cycle with a virtuous one. A new NAFTA, with rules that working people help write, is an opportunity to begin constructing a Global New Deal for working families.5 We hope these recommendations are the beginning, not the end, of the conversation about how to reform NAFTA.

Democratize the Renegotiation Process. The TPP negotiations demonstrated that secrecy breeds contempt. NAFTA renegotiation must be transparent, democratic and participatory, with more access for Congress and the public to proposals and negotiating texts. There must be opportunities for public comment, periodic congressional hearings to review progress and more inclusive trade advisory committees.

Add Strong Labor Rules with Swift and Certain Enforcement. To help raise wages and improve working conditions, NAFTA must ensure all workers can exercise fundamental labor rights reflected in ILO labor conventions, including the bedrock right to join unions and negotiate with employers. NAFTA must embed strong labor obligations in the text and establish an independent enforcer with innovative tools and penalties to overcome entrenched indifference to worker rights.

Eliminate Corporate Courts. The new NAFTA must omit the investor-to-state dispute settlement (ISDS) mechanism, which undermines the rule of law and facilitates offshoring by creating unique privileges and private “courts” in which foreign investors can challenge laws they claim will cut profits.6

Create Jobs by Adding Enforceable Currency Rules. NAFTA must include enforceable currency rules subject to penalties for violations. Currency realignment would create 2.3 million to 5.8 million jobs over the next three years.7 Strengthen Rules of Origin. Rules of origin should be set to maximize benefits for workers, farmers and firms in NAFTA countries. This includes increasing regional value requirements for autos, auto parts and other manufactured products, and enforcing “melted and poured” standards for steel.

Strengthen Rules of Origin. Rules of origin should be set to maximize benefits for workers, farmers and firms in NAFTA  countries. This includes increasing regional value requirements for autos, auto parts and other manufactured products, and enforcing “melted and poured” standards for steel.

Improve Screening for Foreign Direct Investment. Update and improve the Committee on Foreign Investment in the United States to be sure it can review greenfield investments and use a “net economic benefit test.” Update NAFTA to accommodate this change.

Improve Trade Enforcement as Part of a Robust Manufacturing Policy. Trade rules are only as good as their enforcement. Enforcement tools must be expanded and used promptly. Rules crafted to create a fair and level playing field and promote good jobs in growing industries will support employment and wage growth in all three NAFTA countries.

Remove Rules That Undermine Protections for Workers, Consumers and the Environment. NAFTA must not limit, undermine or inhibit public interest standards or regulations. NAFTA must ensure that North America’s democracies retain the right to develop, advance and implement commonsense protections, including country-of-origin labeling, free from the threat of trade challenges.

Add Commitments to Invest in Infrastructure. Investing in infrastructure drives long-term, broadly shared growth, but is hard to do when global companies are driving a race to the bottom. Adding an infrastructure commitment will help balance the incentives that have depressed public investment.

Protect Intellectual Property While Ensuring the Right to Affordable Medicines. NAFTA should retain strong provisions to protect creative and innovative workers whose living is tied to international copyright protection, while ensuring no patent, pricing or data protection rules undermine affordable medicines or interfere with the provision of Medicare, Medicaid or other public health programs.

Add Strong Environmental Rules with Swift and Certain Enforcement. NAFTA must be reformed to include strong environmental standards that will be enforced. NAFTA must require adoption of and compliance with key multilateral environmental agreements; prohibit illegal trade of timber and wildlife; promote responsible fisheries; and ensure countries cannot gain an unfair trade advantage by allowing highly polluting practices.