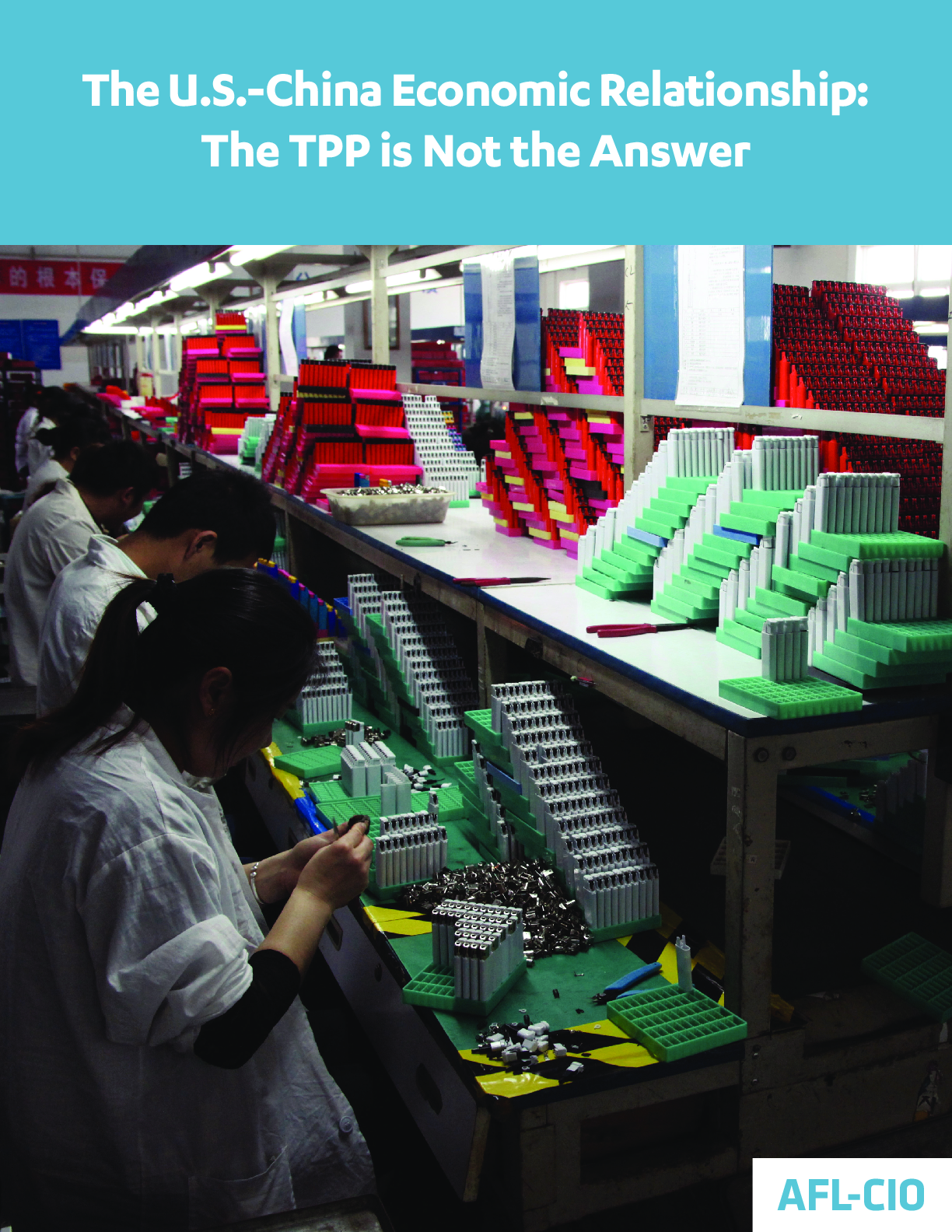 Bottom line: Based on the information publicly available, it appears that rather than set high standards for trade in Asia, the Trans-Pacific Partnership (TPP) will advance the interests of global corporations over the U.S. national interest. As it stands, the TPP is likely to harm the American economy and its workers.

Important trade policy reforms needed to achieve shared prosperity and sustainable growth and development in the TPP are unfortunately nonexistent (climate change and currency), inadequate to the challenge (labor) or counterproductive (investor-to-state dispute settlement, or ISDS). The deal is unlikely to help workers organize, bargain and raise wages in Vietnam, Mexico or the United States, and it won’t prevent any trading partners from disadvantaging American manufacturing by manipulating their currency.

The TPP will allow China to reap benefits without even joining. Its rules of origin, lack of rules on currency manipulation and benefits that would apply to Chinese companies operating in any of the TPP countries mean that China has very little incentive to change the mercantilist model that has been undercutting U.S. manufacturers and displacing millions of U.S. jobs for more than a decade. For example, if Chinese intermediate parts are exported to Malaysia for final assembly and export to the United States, those parts can be made far out of compliance with any TPP standards but still receive TPP benefits.

China is already deeply integrated into trade and supply chains with all TPP countries—far more deeply than the United States is in many cases. A number of forces are responsible for drawing China closer together with other Pacific economies, including geography and several hundred billion dollars in Chinese foreign investment and development funding. It is difficult to believe that these deep relationships will be undone simply through the conclusion of the TPP, particularly given its porous rules.

There is no reason to believe that drawing the Pacific Rim countries away from China is a realistic goal, so long as China continues to offer mutually beneficial trade, investment and supply chain opportunities to those countries. It seems reckless to ask Congress to enter into a deal that has a high probability of undermining U.S. wages, jobs and labor rights—as previous trade agreements have done—especially given that the deal has no real chance of diminishing China’s existing economic influence.

What the TPP will affect is the relative attractiveness of Vietnam, which has no free labor unions and wages one-third of China’s, as an alternative manufacturing location for global corporations. In recent years, rising wages in China and concerns about supply chain and intellectual property risks have helped drive some manufacturing operations in U.S. firms’ supply chains back to the United States.

As it stands, the TPP will do little but make it easier for firms tired of rising wages in China to move jobs to Vietnam and enshrine corporate power over regulatory policy through ISDS. This is a model for increasing corporate profits, but not for helping U.S. workers and small firms or for creating wage-led growth in the Pacific Rim.

The TPP may well result in downward pressure on wages in China, undermining the U.S. manufacturing and job growth revival as well as delaying the emergence of a larger, more affluent Chinese middle class that could provide a larger market for U.S. exports.

Given that the TPP is extremely unlikely to create the strategic advantage over China that its supporters claim, Congress must reject the “TPP at any cost” argument. A low-standards TPP, which is what the deal is shaping up to be given its inadequate rules on labor, environment, rules of origin and state-owned enterprises; its dangerous privileges for investors; and its total lack of currency and carbon provisions, is demonstrably worse than the status quo, and won’t force China to become a nation that trades fairly. The only kind of TPP worth doing is a truly high-standards TPP that prioritizes workers’ rights, democratic governance, a growing middle class and protections for the planet over corporate profits. The TPP as currently conceived is not that deal, which is why Congress must reject Fast Track and maintain its leverage to get the TPP right for America’s working families.