Remarks as Prepared for Delivery

Good morning. Thank you all for joining us as we launch this year’s AFL-CIO Executive Paywatch report. And a big thank you to Brandon Rees, the AFL-CIO’s Deputy Director of Corporations and Capital Markets, for his work on this important project.

We are calling this year’s report “Greedflation,” and you can visit our newly updated website by going to Paywatch.org.

So what is Greedflation?

It’s when CEOs force price increases onto working people as consumers while pocketing record profits and giving themselves a raise.

In fact, according to the Economic Policy Institute, corporate profits have accounted for half of all rising prices since the economic recovery from COVID began.

It’s another version of ‘more for them and less for us.’ And it comes at a time when working people’s living standards have declined with every increase in the price of food, rent, and gas.

And the data from our Paywatch report backs our definition of greedflation up.

Last year, S&P 500 Index company profits grew by a record 17.6 percent. And the CEOs of those companies received, on average, $18.3 million in total compensation. That’s an 18.2 percent increase in just one year.

So when you look at those numbers...and at CEOs trying to blame workers for inflation...it just doesn’t add up. They say that unemployment is too low. They say they can’t find enough workers to fill their low paying jobs.

But the problem with our economy is not too many jobs, it’s economic inequality.

So to put a fine point on this, during the pandemic, the ratio between CEO and worker pay jumped 23 percent.

Instead of investing in their workforces by raising wages and keeping the prices of their goods and services in check, their solution is to reap record profits from rising prices and cause a recession that will put working people out of our jobs.

The “heroes” of the pandemic – and by heroes I mean the working people who showed up and risked their lives and health and safety to keep our country running – are still showing up and working around the clock, but working for less.

Runaway CEO pay is most apparent in the consumer discretionary sector of the economy. This industry includes the goods and services that working people buy with their disposable income if they have anything left after paying for the basic necessities.

Last year, CEO pay at consumer discretionary companies in the S&P 500 Index jumped 79 percent. Their average pay was an incredible $26.1 million. And they made 872 times that of their employees. 872 times!

But even that pales in comparison to the company whose CEO sits at the top of the Greedflation index of CEO-to-worker pay. I’m sure you can guess who it is — it’s Amazon.

Meanwhile, Amazon increased the price it charges for its Prime membership by nearly 17 percent to $139 in February of this year. And the company’s Whole Foods grocery store chain recently started charging new fees for Prime member home delivery.

But working people are starting to fight back against the economics of Greedflation. From Bessemer, Alabama to Staten Island, New York, Amazon workers are coming together to form unions and negotiate for a fair return on their work.

And it’s not just Amazon workers who are exercising their freedom to unionize. Petitions with the National Labor Relations Board by workers to form unions jumped 69 percent in the first half of this year compared with the previous period in 2021.

Corporate profits and runaway CEO pay are responsible for causing inflation, not workers’ wages. That’s why we are calling for a workers first agenda to build a better America.

We need stronger labor law enforcement to protect the rights of workers to join unions.

We need to lower costs for working families by reducing the cost of child care and prescription drug prices. And we need to fully invest in public education.

These are real solutions to fix Greedflation and restore balance to our economy.

And now, I’d like to turn it over to Brandon Rees, who will walk us through the rest of this year’s Executive Paywatch website. 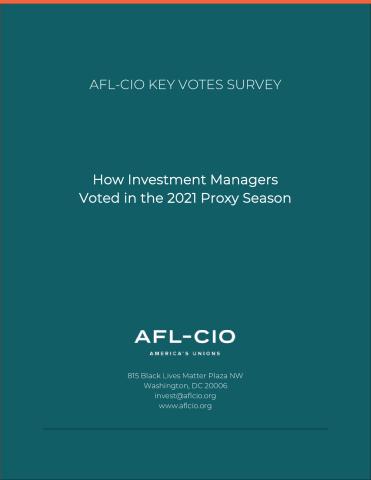 Redmond to Steelworkers: We Can Overcome Any Challenge