I want to thank the World Peace Prize Council, Father McManus and Barbara for all you do and for thinking of me for this honor. Thank you, Reverend Dr. Han Min Su for your vision and kind words. Also a special thank you to President Boland for your introduction. Jim you have been a true and supportive friend, going back before I was elected to this office. I want you to know how much I value that friendship.

And thank you to everyone who took a pause from your busy day and being a witness as I receive this highly underserving honor. I especially want to thank my assistant, the incomparable Francine Thompson, who takes care of Mike and I every day.

Brothers and sisters: As I was thinking of what to say today, I was reminded by a great philosopher called Mike Cavanaugh who said, “peace is not just the absence of conflict.” Then I started to think "what is peace?"

As you heard in my intro, I know what it is like to live in conflict, war and injustice. When I was growing up in Ethiopia, I didn’t know anything but war, conflict and injustice. I just want you to imagine what began in 1976, when Mengistu Haile Mariam took control of the military dictatorship and ousted Emperor Haile Selassie, and lasting until 1984, an estimated 500,000 to 750,000-- mostly teenagers and young adults of high school and college age--were murdered, tortured or just disappeared in Ethiopia. That’s when, at the age of 13, I started dreaming of peace. That is the reason I, and millions like me, leave their homes and migrate in search of peace.

Today, as I stand before you, the world is less JUST to be peaceful. Especially if you are a migrant like I used to be. Even worse, searching for that imagined peace, one can end up being enslaved. I am talking about real slavery here.

As some of you may have seen, I watched footage that shows an auctioneer standing in front of a group of young men, shouting: “Big strong boys for farm work. 400? 700? 800?"

It is now clear that slavery is an outrageous reality in Libya.

The auctions are reminiscent of one of the darkest chapters in human history when millions of Africans were uprooted, enslaved, trafficked and auctioned to the highest bidder.

We need to fight for peace today more than ever. But what does that mean? As Mike reminded me peace is not the absence of conflict, peace only happens when we all rise up for justice. There can’t be any a real peace until we find justice for millions of immigrant workers here in the U.S. and the hundreds of million workers around the world. There can’t be real peace until black men and women are free to drive to work without the fear of being shot and killed by cops.

We eliminate the kafala system in the Middle East that denies workers their basic freedoms.

We must restore democracy here at home and ensure one person, one vote.

In the labor movement, we have known for a long time that peace can’t exist without justice. That's why we say, "No justice, no peace. No justice. No peace." 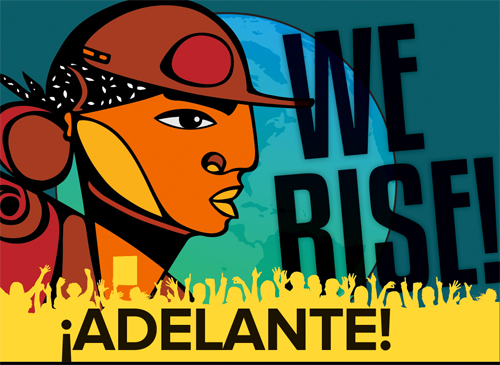