The AFL-CIO is pleased to provide comments regarding the harm caused by trade agreement abuses and violations. As detailed in our submission of May 10, 2017, the substantial U.S. global trade deficit acts as a drag on job and wage growth. This deficit is as large as it is due to failures of domestic economic policy, trade rules, and trade enforcement. U.S. policy needs to improve in all areas—not just enforcement. Violations of trade rules—whether by trade deal partners or by other trade partners—have harmed America’s working people, firms and farms. This submission will briefly address the harm caused by these violations and the U.S. failure to effectively respond.

The United States has never imposed trade sanctions or even a fine as a response to labor violations by FTA partner countries even though U.S. trade partners include the world’s worst violators of trade rights. The U.S. has only attempted dispute settlement once, against Guatemala—a case that the U.S. recently lost, in large part due rules in the labor chapter that place additional hurdles that make it difficult to win a labor claim.1 Due to a combination of inadequate rules, a choice of trading partners with poor labor records, the failure to ensure that trading partners are in compliance with rules before trade deals take effect, and a history of inadequate enforcement efforts, the labor obligations of U.S. trade agreements have been largely ineffective. Inadequate provisions include the discretion to indefinitely delay acting on labor rights violations or to refuse to act at all. In no case has the U.S. selfinitiated enforcement of labor provisions in an FTA, even in trade agreements involving Guatemala and Colombia, countries in which labor leaders regularly face intimidation, threats, violence, and even assassinations.2

Because employers in our trading partner countries continue to abuse workplace rights, workers in the U.S. and globally will continue to make lower wages and will have fewer benefits and more dangerous workplaces than they otherwise might. An injury to a worker in Guatemala, Bahrain, or Peru will indeed affect his or her U.S. counterpart by driving down wages and working conditions. Thus, the U.S. government can help U.S. workers by better addressing violations of labor provisions in existing and future trade deals—as well as by negotiating more effective labor provisions.

When workers lack the right to speak up about workplace conditions and bargain collectively to improve their lives and livelihoods, it keeps wages, benefits and job safety lower than they would otherwise be. This race to the bottom is real and has led to a global weakness in demand that hampers economic growth and exacerbates economic inequality. Critically, the International Monetary Fund—whose policies are frequently hostile toward unions—has identified a link between the decline in unionization and the dramatic increase in inequality worldwide. Without clear, strong, and effective labor provisions—and most importantly—swift and certain enforcement, the obligations cannot help protect workers or raise their wages. 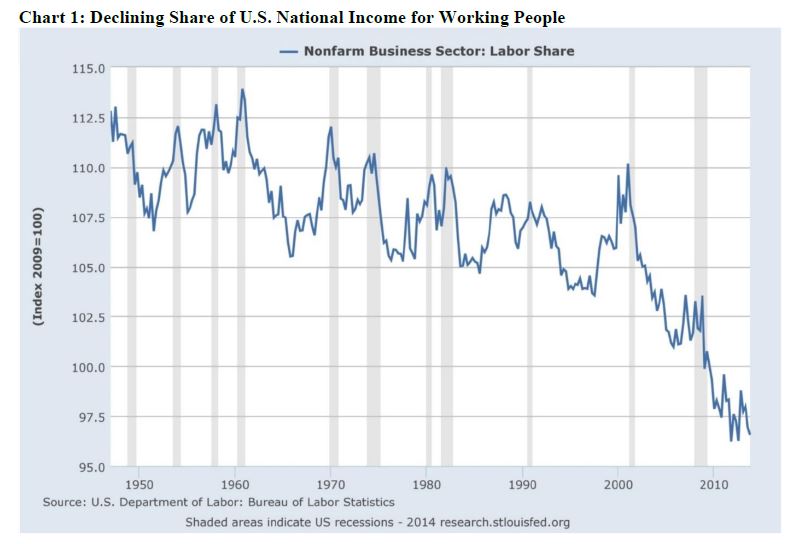 Mexico provides a case in point. Mexico, like other popular offshoring destinations, promises low wages, no unions (or company-dominated unions) and substandard workplaces. Unfortunately, Mexican workers can face grave consequences for attempting to exercise their basic human rights. This is because, with few exceptions, Mexican labor unions are undemocratic and aligned more with employers or local political elites than with workers. These employer-dominated unions often sign contracts without any participation or input from workers for the sole purpose of interfering with the right to form effective, worker-directed unions. The cumulative effect of these bogus unions is to lower wages and working conditions in Mexico. Improving wages in Mexico will reduce the ability of employers to use NAFTA as a tool of arbitrage that pushes wages down across North America. Higher wages in Mexico not only are good for Mexico’s working families, they are a required outcome of beneficial trade policy.

NAFTA’s labor side agreement has proved an ineffective tool to address abuses and protect workers. Of 39 labor submissions by civil society, nine were declined for review and three cases dating as far back as 2008 remain unresolved. In no case has a NAFTA country improved its labor laws or faced a trade penalty as a result of the NAFTA labor process.3

As a result of the conditions on the ground, and the U.S.’s history of lax enforcement, employers know that they will benefit not only from lower wages in Mexico, but also from company-dominated unions and a lax labor and environmental regulatory regime. This provides an additional pull factor, drawing investment to Mexico, where what had been good family-wage jobs in the U.S. are often converted into dead-end sweatshop jobs in Mexico. Companies know that they can pay subpar wages, allow unsafe working conditions and escape compliance with environmental and climate regulations and face no trade consequences whatsoever.

Without high labor and human rights standards and strong enforcement tools that cannot be weakened through delay, inaction, or the acceptance of “progress” as a substitute for compliance, the labor rules in U.S. trade deals will continue to provide cover for policies that impoverish workers. On June 12, the AFL-CIO submitted comprehensive recommendations to improve labor rights obligations in future U.S. trade deals.4 Moreover, even without changing the terms of existing deals, labor obligation violations can be better addressed by ensuring that the Department of Labor’s International Labor Affairs Bureau receives robust funding and by employing a “whole of government” approach to vigorously protecting labor rights.5

No U.S. trade deal, whether bilateral, plurilateral or multilateral, contains effective currency rules, subject to trade sanctions. Yet currency manipulation and misalignment have been used to undermine trade commitments and harm U.S. working families. “Diplomacy-only” has proven to be an ineffective approach to addressing currency misalignment, most notably with respect to China. Before the inception of the World Trade Organization, U.S. administrations tried more creative approaches (e.g., the 1985 Plaza Accord). Since that time, however, the U.S. approach to currency misalignment has been dominated by the desires not of U.S. manufacturers and their employees, but by Wall Street and global corporations that produce largely outside the U.S. As a result, U.S.’s ineffective approach to currency manipulation and misalignment has benefitted firms that choose to produce elsewhere and export to the U.S., while harming those who produce in and export from the U.S.

U.S. trade deficits with the world and with several specific countries are merely one way to measure unaddressed trade violations. U.S. trade policy is unbalanced—not so much benefitting one country against another, but skewing benefits to the economic elites of each country while leaving workers in all countries to bear the risks in terms of wage and job loss and reduced public investment. In particular, the U.S. has large and persistent trade deficits with China and Japan due in large part to currency misalignment and other non-tariff barriers.

Chart 2: Job Displacement Due to Lack of Currency Enforcement

Economists and elected officials from the right, center, and left agree that currency manipulation and misalignment are harmful trade practices that should be addressed. America’s workers have paid a heavy price as millions of U.S. jobs have been lost due to this practice. The Economic Policy Institute (EPI) concludes that reducing the U.S. trade deficit through currency realignment would create 2.3 million to 5.8 million jobs over the next three years.8

The Peterson Institute for International Economics in 2012 identified 20 “egregious” currency manipulators, including China, Japan, Taiwan, Thailand and Malaysia. The U.S. has trade deficits with each of these countries.9 Unaddressed trade deficits and misaligned currencies represent displaced U.S. jobs. The administration must develop and use effective tools to address these misalignments or risk harming U.S. workers and firms for the foreseeable future.

China, Korea, and Japan, among many others, have used non-tariff barriers such as taxes and opaque licensing and certification requirements to keep markets closed even in cases in which tariffs are low or non-existent. The U.S. response has been inadequate.

For example, despite having no tariffs on imported automobiles, more than two-thirds of the U.S. trade deficit with Japan is in the auto sector. Despite decades of efforts by Japan’s trading partners to open the Japanese market to imported automobiles, Japan remains the most closed automotive market in the world, with import penetration of less than 6 percent. In 2015, Japan exported more than 1.6 million vehicles to the U.S., while it imported just 19,000 U.S. vehicles.10 Both Hyundai and Ford tried to penetrate the Japanese car market from inside Japan, and both abandoned their efforts. The evidence shows that tariffs are not the issue—and that the U.S.’s failure to effectively address non-tariff barriers designed to keep markets closed is costing jobs and wages for auto sector workers.

The U.S.’s ineffective approach to trade with China merits special mention given that in 2016, the U.S. goods trade deficit with China was in excess of $347 billion.11 China’s mercantilist approach to trade, even after its entry into the WTO, has had significant adverse effects on U.S. and world markets. China’s unfair trade practices have been a drag on U.S. wage and job growth. These practices eliminated 3.4 million U.S. jobs between 2001 and 2015 alone.12 Nearly three-fourths (74.3 percent) of the jobs lost were in manufacturing (2.6 million), including 1,238,300 jobs in computers and electronics.13 The manipulation and misalignment of the renminbi during this period has significantly limited U.S. exports to China while bolstering Chinese exports to the U.S., thereby contributing to a structural trade deficit. Rampant intellectual property theft and forced technology transfers in China have cost untold millions for U.S.-based creative artists and innovators, including many of America’s most sophisticated manufacturers.

China’s continuing limits on market access have coerced major investments by U.S. companies, ostensibly to access Chinese consumers, even though such access does not always materialize. Instead, those investments are often directed to achieve the transfer of specific advanced technologies to SOEs and to producing for the U.S. market under labor, environmental, and health and safety conditions that fail to meet international standards and that disadvantage U.S.-located producers.

Those who supported China’s accession to the WTO argued that China would become a market economy and that a worldwide level playing field would benefit America’s firms and workers. But, even when the U.S. has acted to address China’s mercantilist tactics, U.S. trade law prevents action until U.S. firms and workers have already been significantly harmed. Once the workplace doors have been shut and jobs lost, in most cases it is too late to bring jobs back. Though the U.S. can must change policy to better address trade violations to protect jobs and help create new ones, for the jobs already lost, it is most often simply too late for enforcement actions to help.

The U.S. must step up its approaches to unfair trade practices by China, including but not limited to:

Despite an uptick in trade enforcement cases against China in recent years, more is needed. U.S. firms and workers need a pro-active response, including automaticity in enforcement, a change to what constitutes an “injury” in U.S. trade law, new tools to address overcapacity and currency misalignment, a proactive manufacturing policy (including investment in infrastructure and research and development), and greater assistance to small businesses, working people, and communities who want to bring cases but lack the wherewithal to pursue them.

1 For an analysis of the inadequacies of the labor obligations in current trade agreements, see “U.S. Trade Policy Fails Workers,” available at: https://aflcio.org/2017/6/26/us-trade-policy-fails-workers.

2 Guatemala and Colombia have long ranked among the ten worst countries for workers’ rights. See more details in the “ITUC Global Rights Index 2017: Violence and repression of workers on the rise,” available at: https://www.ituccsi.org/ituc-global-rights-index-2017-18767?lang=en.

3 For a detailed analysis of specific failures of the NAFTA labor side agreement, see “NAFTA at 20,” available at: https://aflcio.org/reports/nafta-20.

5 In 2014, the Government Accountability Office detailed a number of inadequacies in U.S. monitoring and enforcement of labor provisions in trade agreements in its report “U.S. Partners Are Addressing Labor Commitments, but More Monitoring and Enforcement Are Needed.” The report can be accessed here: https://www.gao.gov/products/GAO-15-160.