All too often, the rich and powerful use their influence to manipulate the tax code and pass budgets that serve their interests at the expense of working people. They get greedy politicians to introduce tax bills as “tax reform,” but these bills aren’t about reforming our tax laws, they’re about giving more tax breaks to Wall Street, big corporations and millionaires and sticking working people with the bill.

Trillions of dollars are diverted to CEOs and Wall Street executives and companies that outsource jobs to other countries instead of being used for the public good, like fixing our crumbling bridges and schools, strengthening our public education system and improving our nation’s infrastructure.

Real tax reform should close the loopholes that give massive tax breaks to companies that outsource jobs and profits, and would ask millionaires and Wall Street to pay their fair share for once. That would allow us to make the kind of investments we need to create good jobs for working people now and in the future, while still being able to fund the critically important programs--like Social Security, Medicare and Medicaid--that protect our nation's vulnerable.

The labor movement fights for the kind of tax and budget policies that meets the needs of working people, and fights against the ones that just lines the pockets of the wealthy and powerful. 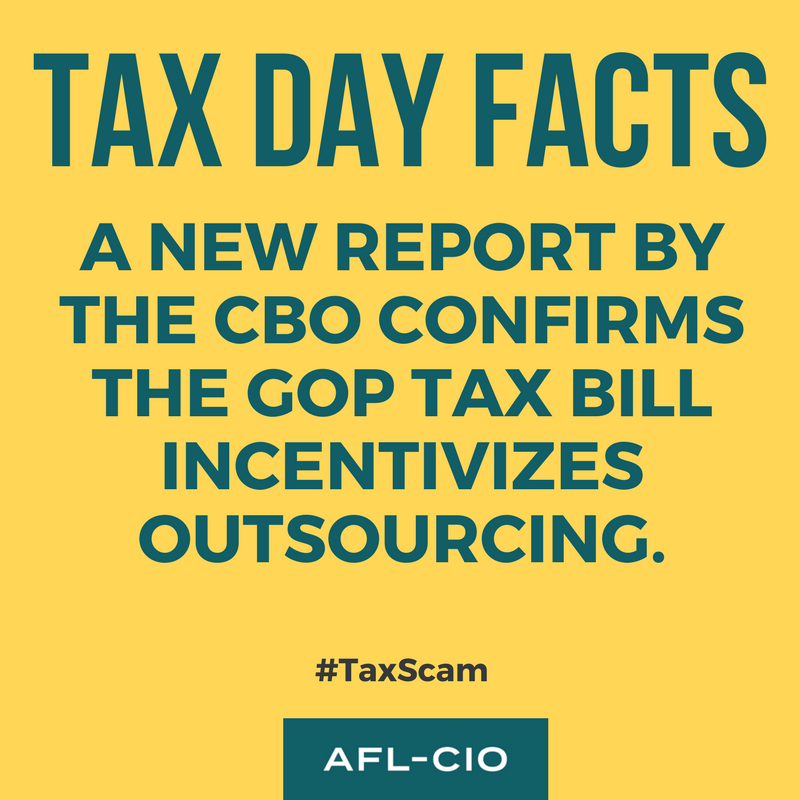 Did You Know
The maximum fine OSHA can issue against an employer is $134,937 for a “willful” OSHA violation. For other violations, including “serious” and “other than serious” offenses, the safety agency’s fines max out at $13,494 per infraction.
60
The number of Fortune 500 companies that avoided paying all federal income taxes in 2018.

Spriggs: 'Most Economic Uncertainly Since WWII'

Join the Campaign to Restore Tax Fairness for Arts Workers

Many of the AFL-CIO’s arts and entertainment unions are launching a joint campaign to tell Congress to restore tax fairness for arts workers by supporting the Performing Artist Tax Parity Act (PATPA), H.R. 4750 and S. 2872. The PATPA will be a game changer for arts workers, allowing them to once again deduct common business expenses that come with practicing their crafts. The campaign is working to build additional support in Congress so that the bill is brought up for a vote in the coming weeks.

Bill Spriggs on the Economy and Federal Reserve Policies (Bloomberg)

The Trump Budget: The Other Shoe Drops

When Congress passed a $2 trillion tax cut for corporations and the wealthy in 2017, we warned that the obscene cost of these tax cuts bill would be used as a pretext to cut programs that benefit working people.

The AFL-CIO strongly urges Congress to swiftly pass legislation that would provide back pay to government contract employees.

Corporate Tax Chartbook: How Corporations Rig the Rules to Dodge the Taxes They Owe (June 2017)

Principles for the Upcoming Tax Reform Debate (April 2017)
Financing Recovery and Fairness by Going Where the Money Is (Nov. 2016)
A Financial Transaction Tax Would Help Ensure Wall Street Works for Main Street (July 2016)
The Short- and Long-Term Impact of Infrastructure Investments on Employment and Economic Activity in the U.S. Economy (July 2014)
The Simple Fix to the Problem of How to Tax Multinational Corporations--Ending Deferral (March 2014)

Reining in Wall Street to Benefit All Americans (June 2016)