The labor movement has always led the charge to protect working people from workplace injury, illness and death. Working with allies, we have won strong protections against hazards and stronger rights for workers. Through organizing and collective bargaining, unions have gained even stronger protections and rights that have given workers a real voice in safety and health at the workplace.

The labor movement fought to pass the Occupational Safety and Health Act of 1970 and the Federal Mine Safety and Health Act of 1977 that promises working people the right to a safe job. We have made real progress: Workplace deaths and injuries have declined dramatically. In fact, the lives of more than half a million workers have been saved by strengthening workplace protections. But too many working people still work in unnecessarily unsafe conditions. Thousands of workers are killed each year—and millions more suffer injuries or illnesses—because of their jobs. There is much more work to be done and we continue to advocate for safe workplaces.

Learn more
Did You Know
Workers 65 or older are nearly three times more likely to die on the job than other workers. 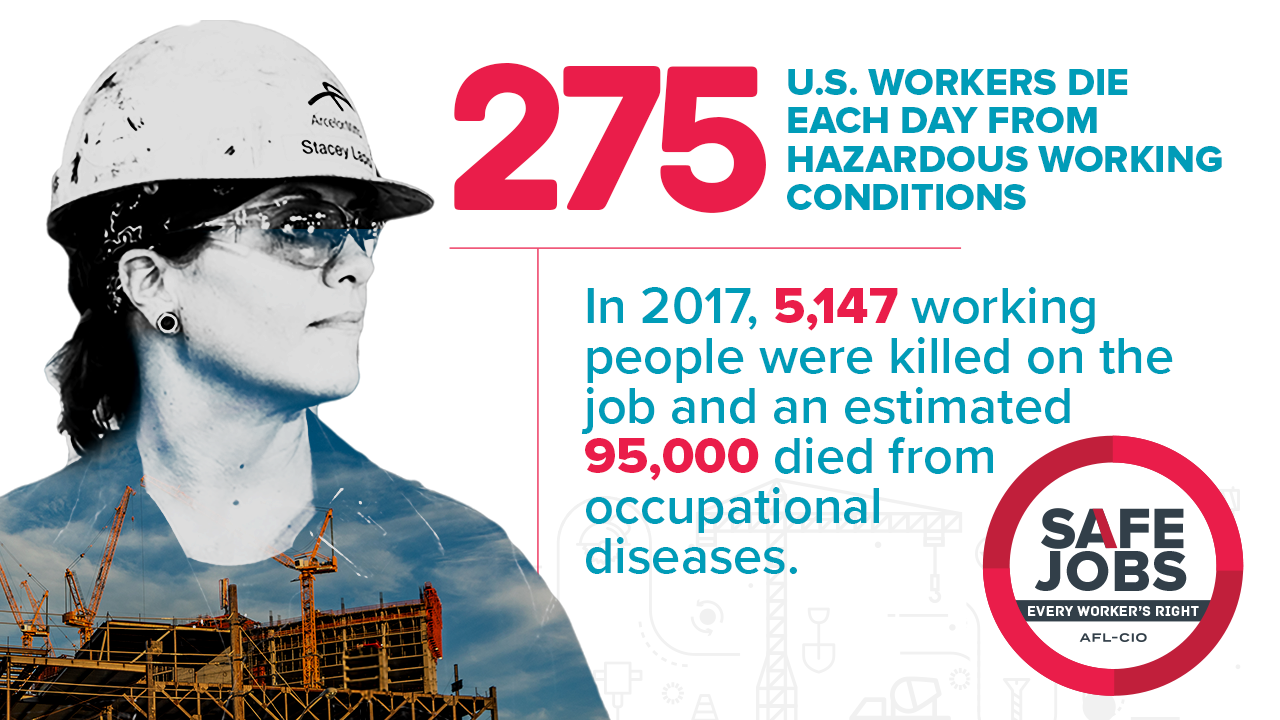 5,147
The number of workers killed on the job in the United States in 2017.
Did You Know
Two of every 3 serious workplace violence events are suffered by women. Download the fact sheet.

On April 28, the unions of the AFL-CIO observe Workers Memorial Day to remember those who have suffered and died on the job, and to renew the fight for safe jobs.

Letter in Support of the Comprehensive Addiction Resources Emergency Act

A letter to Sen. Elizabeth Warren and Rep. Elijah Cummings in support of the Comprehensive Addiction Resources Emergency Act, which they introduced.

Letter in Support of the Transit Worker and Pedestrian Protection Act

Letter urging representatives to co-sponsor the Transit Worker and Pedestrian Protection Act, which is needed to help address the growing epidemic of assaults committed against transit workers and enhance pedestrian safety.

12 Things You Need to Know About Death on the Job

The AFL-CIO today released its 28th annual Death on the Job report. Each April. we examine the state of worker safety in America. This year's report shows that 5,147 working people were killed on the job in 2017. Additionally, an estimated 95,000 died from occupational diseases. 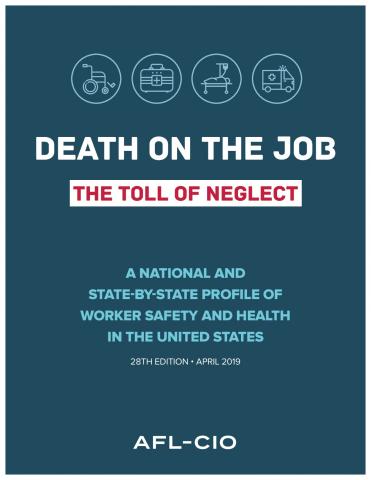 This report features national and state information on workplace fatalities, injuries, illnesses, the number and frequency of workplace inspections, penalties, funding, staffing and public employee coverage under the Occupational Safety and Health Act.

According to an annual report released today by the AFL-CIO, in 2017, 5,147 working people were killed on the job and an estimated 95,000 died from occupational diseases. Each and every day, on average, 275 U.S. workers die from hazardous working conditions. Workplace violence is the third-leading cause of workplace death, accounting for 807 deaths, including 458 homicides. For the third year in a row, workplace violence injuries increased, with nearly 29,000 workers suffering serious violence-related injuries due to assault on the job. Yet, even as violence increases in the workplace, the Trump administration has sidelined developing and issuing an Occupational Safety and Health Administration workplace violence standard.