Good morning, brothers and sisters. It is great to be back in Wisconsin. Thank you, Brother Phil (Neuenfeldt), for that introduction. You and Sister Stephanie (Bloomingdale) are doing an incredible job leading this labor movement forward. Sister Stephanie—congratulations on your election and on becoming the first woman to lead the Wisconsin AFL-CIO.

As some of you may be aware, Phil is undergoing chemotherapy and radiation treatment for cancer. Phil—I want to tell you something today from the bottom of my heart. It’s not just the drugs fighting those cancerous cells. It’s all of us. Every worker. Every union. We’re inspired by your courage. We’ve got your back. And I’ll tell you what: cancer has met its match!

You see, Phil is a fighter. And the labor movement here in Wisconsin knows a thing or two about fighting the good fight. It’s been a difficult seven years. The attacks are relentless. Our opponents are shameless. There’s been defeats and false starts. Yet through perseverance and sheer grit, we are starting to turn the tide. Workers are on the march again. We’re writing a comeback story. And I believe the hope and progress of 2018 was made possible by the heroes of 2011. On a cold winter day that February, I joined tens of thousands of protestors at the State Capitol in Madison. The sights and scenes took my breath away. The author and journalist, John Nichols, a Madison native, called it an uprising.

Brothers and sisters, the seeds you planted in 2011 and nourished in the years that followed are alive and well today. 262,000 new members joined unions in 2017...and here’s the best part...three quarters of them were under the age of 35. Gallup just did a poll that found our approval at 62 percent...a 15-year high. And new research from MIT shows half of non-union workers would vote to organize today if given the chance. That’s more than 60 million people!

Something is happening in America. Collective action is on the rise. It's unlike anything I’ve seen in my 50 years in the labor movement.

From coast to coast, and all over the heartland of America, ordinary people are recognizing that the best way to win is by standing with the person next to us. And as a labor movement, it is our job to ignite the flames of justice, not contain them.

That’s what we did in Missouri. Last month, voters there went to the polls to decide the future of right to work. And with more than 67 percent of the vote, the Show Me State sent that horrible law into the ash heap of history. It wasn’t even close! Democrats voted no. Half of Republicans voted no.

After the Supreme Court ruled against us in Janus, many pundits wondered if it would be the death of the labor movement. Well, brothers and sisters, they got their answer! The Chamber of Commerce said that, for every punch they threw, working people threw ten more. Even the Wall Street Journal warned CEOs that unions are on the attack.

Hell yeah, we are!

This is our time to reclaim America for the people who build it and make it work!

Remember, throughout the entire history of our movement, we’ve never had anything handed to us.

Frederick Douglass once said, “Power concedes nothing without a demand. It never did and it never will.”

Brothers and sisters, time and time again, we have fought for every victory. We bled to secure our right to stand together and bargain collectively. We marched and sacrificed to end child labor. We faced down the powers of Washington and Wall Street to win a minimum wage.

In the face of seemingly insurmountable opposition, we steadily built a fairer economy and a more just society...because we had one advantage on our side: Solidarity.

American greatness...American decency...the American Dream itself was built through solidarity...as workers joined arms and marched forward as one in common cause.

Bonded by a common struggle, working people kept fighting and discovered a fundamental truth that carries us to this day: You can’t stop all of us.

We are an unassailable force when—and only when—we stand together.

Because this is our country...and it’s time...IT’S HIGH TIME...we took it back!

Now, I love Penn State. But on November 6, I want to be singing “On Wisconsin.” Already this year, our endorsed candidate won a special election in Wisconsin’s 10th Senate District. This is an area that went for Romney and Trump by huge margins. But union members and our allies banded together to win 55 percent of the vote!

Already this year, we’ve sent an ally to the State Senate in the 1st District, flipping another seat into pro-worker hands.

Already this year, we’ve carried a friend to the Wisconsin Supreme Court with an overwhelming statewide victory, ensuring that a voice for justice and fairness will preside for the next 10 years.

Are you noticing a pattern?

The uprising that started in Madison has made its way to Milwaukee and Kenosha and Green Bay. And six weeks from today, we’re going to end the era of union-busting in this state.

Brothers and sisters, we’re going to send Tammy Baldwin back to the U.S. Senate.

We’re going to send Randy Bryce to Congress because Washington can always use another trade unionist with a mustache.

We’re going to continue to elect union members and allies at all levels of government, from the school board to the State Senate.

And on November 6, we’re going to have a party. Scott Walker’s retirement party.

It’ll be at a union hotel. It’ll be catered and served by union labor. We’re going to gather around and thank Governor Walker for helping to bring us together.

And then, we’re going to put his ass on a bus.

Scott Walker is a liar. He’s a fraud. He’s a national disgrace. Some baseball games have lasted longer than his presidential campaign.

And now he wants the people of Wisconsin to give him another term. After Act 10. After right to work. After repealing prevailing wage and Project Labor Agreements. After his policies drove down wages and union membership and turned a surplus into a deficit.

I don’t think so.

Did you hear what Scott Walker said last week? He complained that Tony Evers is bought and paid for by unions. First of all, this is ironic coming from a man who was basically adopted by the Koch Brothers. Secondly, think about what he’s really saying. Scott Walker wants you to believe "union" is a dirty word.

Well, I have a message for him. Unions are the women and men who’ve bravely responded to the recent wave of flooding and tornadoes here in Wisconsin. Unions are the teachers who educate our kids and the nurses who care for our aging parents. Unions are the electrical workers who help light up Lambeau Field and the housekeepers and bartenders serving us here at the Hyatt.

We are the union.

And, six weeks from today, we’re going to end Scott Walker’s reign over Wisconsin once and for all. We’re going to send Tony Evers to the Governor’s Mansion and finally...FINALLY...take back this state for working people!

Brothers and sisters, when I think about the attacks against us...from corporations...from the Supreme Court...from anti-worker politicians like Scott Walker...I get angry. And sometimes, I even get discouraged.

But on the darkest of days, I remember something my grandmother used to tell me. Stana tupe benne. In Italian, it means: from everything comes some good.

Now you might be wondering….what good can come from Act 10 and Janus and the proposals to gut our financial, health care and retirement security? What good can come from a Supreme Court that rules with corporations 90 percent of the time and a nominee like Brett Kavanaugh who would push that number even higher?

What good can come from a governor and a president who have used their office to actively hurt working people?

The answer is this. The vicious attacks on our unions have brought us closer together.

I had a high school football coach named Bear Stuvek. Bear was one tough son of a miner. He taught me about perseverance and dedication and good, old-fashioned hard work. Bear used to put us through a drill called “Bull in the Ring.” I am certain it would be banned today.

Twelve of my teammates would circle around me. Bear would count off...1, 2, 3, 4...1, 2, 3, 4. He’d call the ones. They’d come and hit me. Then the twos. Then the threes and so on. Bear would keep calling their numbers. And I’d keep getting hit harder and harder. Sometimes I’d be on the ground and wonder whether I should get up. Somehow I always did.

Before long, when Bear would put me in that ring, I’d start hitting back. I’d hit back with everything I had. I’d hit back until they finally got the message that while you may knock me down, you will never...and I mean never...knock me out.

The labor movement...especially here in Wisconsin...we are that bull in the ring. We’ve been getting hit over and over again. Every day. From every direction. They’ve held down our pay. They’ve attacked our health care. They’ve tried to kill our pensions, destroy our jobs and leave us begging for scraps.

Well guess what? Their time is up. Unions are on the move. In every city and every state. Young and old. Black and white. Immigrant and native-born. Gay and straight. Rural and urban. Republican and Democrat.

We’re fighting together and marching together. We're organizing and striking and voting for the dignity that we deserve! We're showing every robber baron and corporate hack that we’re here to stay!

Because we’re the ones who wake our nation up every single morning. We tuck her into bed at night. We build the ships and mine the coal. We lift the loads. We pour the molds. We connect our cities and the world. We teach, heal and make. We package, print and bake. We make this country strong.

We don’t duck and run. We don’t run and hide.

We’re the American labor movement, and we will not...WE WILL NOT...be denied!

Thank you! God bless you! 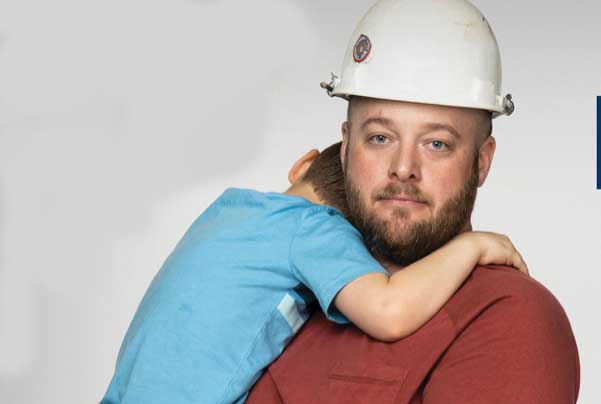